Disability can come in many forms — not just physical — for animals and humans. Sometimes psychic trauma leaves greater disability than any physical malfunction can cause. It’s much more difficult to tell if an animal is emotionally damaged than it is with people, since people can verbalize what they’re feeling. But if you pay attention, you can certainly tell when a critter has been traumatized, as well.

Regardless the species, emotional trauma can result in physical illness. We’ve all experienced the milder forms of this: a headache brought on by extreme emotional tension, a stomach ache or nausea caused by stress or anxiety. There are hundreds, perhaps thousands, of documented cases of what used to be called “psychosomatic” illness, now studied as psychophysiologic disorder.

Trauma can be passive as well as active. I think neglect is one of those passive trauma-causers. All you have to do to see what it can do is walk through a shelter for homeless animals — or people. And neglect of the innate urge to create, which I believe we’re all born with, is one of the worst of those passive damagers.

I’ve long believed that there’s a strong connection between expressing one’s creative self and remaining healthy. I believe that refusal to honor the creative urge is a major contributor to horrible diseases such as cancer and auto-immune afflictions. Not the only cause, but a big one. Why do I believe this? Because it makes sense:

Creative expression in any form — visual or performing art, science experiments, cooking — is a way for us to explore the deeper parts of our brain that, for whatever reason, gets neglected in the rest of our lives. As with dreaming, it’s a way to give rein to our subconscious mind, which is often far more creative than our beaten-into-conforming-submission conscious mind. It is also a way for us to have a voice in a world that may otherwise make us feel silenced, impotent, unimportant…unheard.

If we don’t give in to the urge to create, I believe the energy that initiates that urge gets forced down into some yet-undiscovered recess in our psyche and somehow begins to change form from a positive force to a negative one, such as anger or resentment. And there, it begins to fester, manifesting as one of those diseases that makes our bodies begin to turn on themselves.

There is plenty of science going on right now that connects mental illness to physical ailments. Though my description here is crude, I believe it will one day be borne out by empirical scientific research that proves we can and often do manifest psychic wounds physically, at a cellular level.

So, what does this all have to do with disabled pets? Two things, actually.

One is that I believe choosing to invite an animal of any kind into our lives as a pet is a form of creative expression in itself — much as I believe childbirth is the ultimate form of creation in which humans can engage. Either way, we’re taking on the responsibility to guide and help form the child or the creature as it will exist in this lifetime. The second is that I believe sharing our lives with animals can help — even encourage — us to honor our creative urge.

After all, I would never have had the idea for Almost Perfect had I not invited Idgie into my life. And now she daily oversees my writing activities!

So, I’d like to share with you a blog I discovered this morning by a woman named Lisa Taron. Lisa expresses her creative urge at her blog, The Pet Book Lady.

Lisa is the founding director of Heritage Makers, an online storybooking and digital scrapbooking company. She says she’s “a kid-at-heart businesswoman who helps other people celebrate their lives through Story.” She also honors her creative urge through a career as an illustrator. She illustrated a children’s book, Three Grin Salad, a finalist in the 2007 Indie Book Excellence Awards. It’s a book about encouraging kids to lead happy, healthy lives.

I was delighted to find a page on Lisa’s blog that not only tells, but SHOWS how animals can encourage our creative expressions, and just had to share it with you. Take a look for yourself! 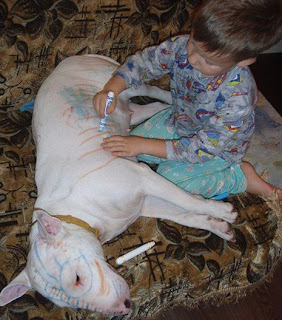 IMPORTANT NOTE:
Crayola for Kids™ markers are water-based and non-toxic.
No pets were harmed in the making of this photo. 🙂