Hey, thanks to everyone who wrote in with their guesses on who’s older, Idgie or me. The correct answer — according to my source — is that it’s me, by 4 years.

The first one to send the correct answer was my friend and fellow creative, Tony Gleeson. Tony’s a professional illustrator, bibliophile and all-around good guy. I’ve known him now for going on 20 years, and the weird thing is…we’ve never actually met. 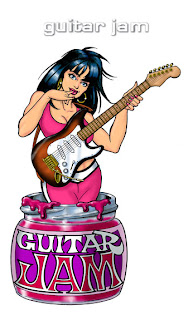 One of Tony’s lissome creations…

We got to be friends after connecting via letters to the editor to a long-extinct trade mag called Graphic Design: USA. (That was back in the earl 90s, before I came to my senses and realized I’d never be a top-o-the-line designer and instead belonged behind a keyboard). We were both bemoaning the arrival of desktop publishing, which took away all the sensuousness of the design/illustration trades. And yes, these were actual SNAIL MAIL letters! There was no such thing as email yet, and we were both still phobic about computers. We both laugh about it now, because neither of us could make our livings without one.

But I’ll always just smile when I think about how long we’ve known each other now, and how many really personal things we’ve shared…yet without ever having actually met in person. What a long, strange trip it’s been…and continues to be.

So, here’s to Tony, also a critter lover, and his fabulous sense of humor. You won, buddy — and your book is on its way.

Thanks for participating, everybody — we’ll do it again soon! Till then – HAPPY SUMMER!