Anyone who knows me even a little bit knows that I can be a little obsessive. Nothing indiscriminate; I’m particular about these obsessions — animals, art, weather, chocolate — but they are obsessions, nevertheless. And weather, particularly severe weather, is one of the biggies for me. And so, when I read about the recent passing of Nin, the mascot kitty of the weather observatory atop New Hampshire’s Mount Washington, of course I had to pay tribute here. 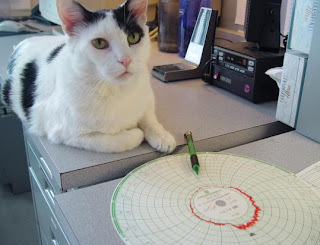 For those less weather-obsessed than I, Mt. Washington is consistently home to the official “worst weather in America.” The highest winds ever recorded outside of severe phenomena such as hurricanes or tornadoes have been clocked right there (231 MPH on April 12, 1934, for those who care). It’s on the highest peak in the White Mountains, and so is the perfect place to observe some of the most punishing weather on earth (or at least in the U.S.).

You can imagine that it takes a pretty special cat to be the mascot at such an important laboratory. And especially one so remote and isolated. He was believed to have been 19 or 20 years old, and had lived at the nearby home of one of the park rangers after retiring from his twelve-year post on Mt. Washington in 2007. You can read more here.

So, here’s to a long life, well-lived. Nin, may you always have a warm square of sunshine to lie in on a kitchen floor somewhere on the other side of the Rainbow Bridge. And as you doze there, may you dream often of the wind whistling through the wires and enjoy loving hands caressing your beautiful fur. Thank you for your service to everyone whose lives are affecting by the weather.