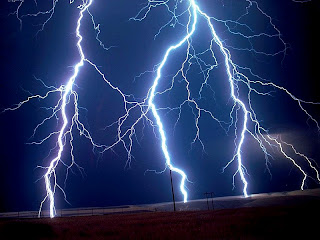 You know, I think it varies as much as it does with children and adult humans, whether pets are afraid of thunderstorms. But our recent rash of severe weather got me to thinking about how different it is for special needs pets–especially those with physical disabilities–to cope with this common fear. 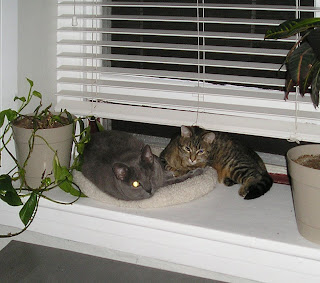 As much of a weather weenie as I am, I’ll admit that I’m often still frightened by really close or intense lightning, or especially by very loud thunder. I don’t think it’s at all silly that I see Winkie’s one eye grow very large as he leaps down from the windowsill where he loves to lay and then skitters underneath the nearest piece of furniture. The same happens with Weaver, if things get really loud, and with Boo Kitty.

But they have something of an advantage over Idgie, who is completely blind. Not only can they see quick escape routes from the window, which must feel tremendously exposed to the horrors of the storm; they can also see the nearest point of refuge. On top of that, their hearing is average, so the thunder is simply loud and frightening. Whereas Idgie’s hearing is so incredibly acute to begin with, that this sudden onslaught of booming decibels must be absolutely terrifying. 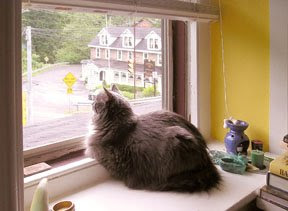 Idgie is a constant fixture at my open office windows. Here, she sits in the front.

I’ve learned to pay attention to the animal signs just as I do to the cloud signs when it comes to forecasting the weather. Ever since 1991, when the annoying clickety-clicking of our two black Labs’ toenails on the kitchen linoleum ended up saving us by keeping me awake long enough to hear the tornado coming when we received no other warning, I’ve known that they can sense things before we do. The restlessness those dogs instinctively felt allowed us time to reach the basement before that damaging storm was upon us. And this summer, I’ve paid attention to Idgie’s physical attitude on days when there’s a severe weather threat.

For the past three weeks, when most of it has taken place, it’s been so hot and sultry that we’ve had the air conditioning on constantly. That means no window-sitting for the kitties, and it really shows in their affect. By early this week, I really believe Winkie (who enjoys this the most) had actually become depressed. So I was thrilled when I woke yesterday to temps in the low 80s and reasonable humidity levels that allowed me to open up the house for a while. 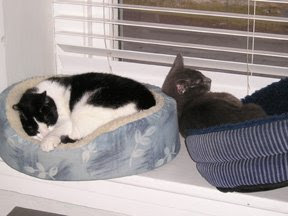 Even when Weaver, our tuxedo boy, does manage to find a window spot,
he rarely gets the solace he prefers. Winkie loves his big bro and
will do what it takes to get as close as physically possible.

Within moments, every cat had found a place in an open window. Even Weaver, our older boy whose heavier weight usually keeps him pretty sedentary and less inclined to the kind of leaping it takes to make the window. Even he was glad for the respite from artificial air, and managed to heave himself up onto the hallway ledge.

But when the storms come during a time when we don’t need the AC on, I notice a change in the kitty’s behaviors. They become more alert, more restive, even as they relax in the windows. I notice that as I track the storms on radar and they move closer to our area, the kitties, one by one, abandon their posts in the windows. Since these are much-coveted spots, I know something’s coming that may be dangerous. The only exception to this is if the coming storm spurs an unusual amount of activity at our bird feeders. Then, that show is simply too tempting to keep even storm-shy kitties away from a front-row view!

Probably because she’s so much more my constant companion in the office, I particularly notice this with Idgie. I also note that as the surface winds shift, she’s more likely to move from the front window to the side and back, since this is a sensory stimulus she can read. So I’ve come to be aware that when she spends more time in the side, or south, window, we’re probably in for a more potent southerly storm, bringing heat and moisture up from the Gulf. 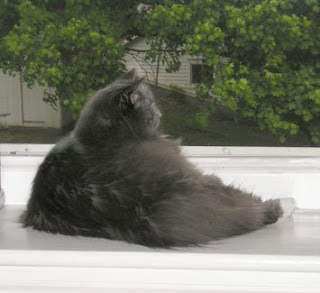 Idgie at the side window in my office. She knows something’s on the way.
But all this gets me to thinking: What’s it like for critters with impaired mobility when a storm strikes and they can’t move away from windows by themselves? Not that they’d necessarily be IN the windows to begin with, but I think the standard anxiety response is to dive under the bed or other furniture. What if they can’t do that? What do people do who can’t be home with their special needs pets all day, the way I’m lucky enough to do? Do you pay attention to the forecast and anticipate this need?

I suppose this is the kind of musing only a truly weather-obsessed person would wonder about, but I’d love to hear from parents of special needs pets to hear what they have to say.

Meanwhile, let me leave you with this absolutely stunning “concert” depicting a thunderstorm. All done without any musical instruments or voice. Enjoy!