Today’s post is from guest blogger Roberta Beach Jacobson. Roberta is a contributor to Almost Perfect: Disabled Pets and the People Who Love Them. She wrote the final piece in the book, Fritz: Pink Ears, Red Tape, about her experience with a cat whose ears were terminally sunburned from the intense sunshine on her home Greek island of Karpathos. With the help of her husband, Alf Meier, she runs Animal Welfare Karpathos, an independent, all-volunteer critter rescue on their home island of Karpathos, in Greece. 25¢ of each copy of the book we sell goes to support the efforts of this worthwhile organization. 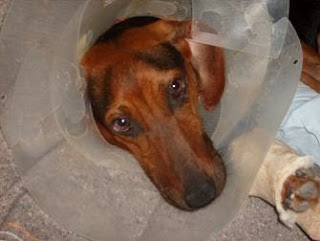 You could say we got tricked into this foster care situation. Greek tourists on our island witnessed the pointer mix dog get bumped by a car, later by another. He had no collar, apparently no owner, so they got him into their rental car to help him.

Someone gave them our telephone number. One of the negatives of living on a remote island is there’s no vet or shelter. My husband Alf, a photographer, is the one called to patch up all the critters in trouble. 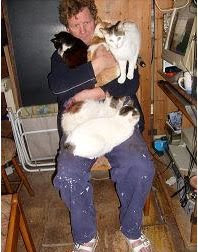 Alf and some of his charges

Brownie, as the tourists named him, got a fiberglass cast. He moved in with us. We assume he’d never been inside a house before. So he could go outdoors when needed, we started sleeping with the kitchen door open. Our regular dog flap is too small for the likes of Brownie!

For whatever reason (my guess is from his licking) he got an infection in one of his wounds. Off came the cast. He got braces and bandages for a few days.

With our gang of 33 rescue cats and three rescue dogs around the house, we’re plenty busy as it is. Still, we’re doing our best to accommodate Brownie. He got a new cast. We had no more fiberglass in our makeshift volunteer clinic (better said, what we had was dried out and worthless), so Alf went to the hardware store for some plaster and got to work on creating a cast.

The Greek tourists came by our house with bones and restaurant treats a few times, but their vacation drew to a close and they headed to the ferry to depart our island.

In the meantime, Brownie was up to a few dog tricks. The plastic cone didn’t stop him from gnawing at his new cast, eventually shredding parts of it to bits. We tried to outsmart him. We stapled two cones together. We don’t live in the sort of place where there’s a pet shop or where we can buy needed supplies. Everything is improvised. We even put a cork at the bottom of the metal stabilizing bar in his cast. (Think of cork-soled shoes!)

Brownie has needed yet another replacement cast. With a little luck, this one will last six weeks. We hope he’ll recover to have full use of his leg, but part of his bone was splintered, so that remains to be seen.
— 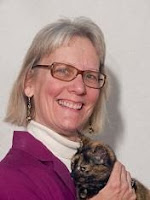 Roberta has her own blog at the Seattle Post Intelligencer online, and can be found tweeting about the beach on Twitter.