Thanks for all the feedback on my Aug. 31st post about Molly and all the sweet critters that have been helped with their own set of wheels. I got a great suggestion from Khyra the Siberian Husky (and sometimes her mom) not to forget about Triumph, another husky who has absolutely earned her name by coming through the most amazing of difficult circumstances with flying colors. So I want to share her story here: 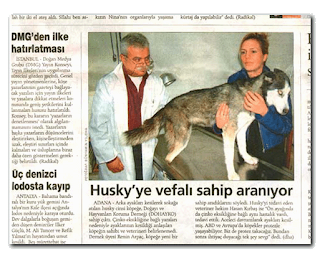 Triumph’s story began in Turkey where she was found on the roadside, bleeding. Her rear legs had been severed. She was taken to a shelter, where the first of many miracles began. They treated her wounds and kept her alive, instead of euthanizing her as many would have.

Her story was put in the local paper (above), and for the next two months, they tried to find her a forever home. Unfortunately, no one came forward. However, two volunteers who worked with the shelter took a liking to Triumph and began the huge effort of trying to find that forever person.

Renin — one of those volunteers — and her mother, Armagon, contacted a friend in Philadelphia. That friend, Coral, put the story up on the Web, with the same picture in the news clipping above. The look on Triumph’s face was hard to ignore for those visiting the Siberian rescue sites, where it caught the interest of Belinda in Baltimore.

She posted it somewhere and it was sent via email to a woman in Nashville, who has worked for years with the most severely abused dogs, damaged either physically or emotionally. “Moe” (as she is called), would be the first to tell you that when she did the first reading of the story and got to the part that said the dog was in Turkey, she just didn’t see what she could do, and deleted the story.

But fate was at work. That same day, another person sent her the same photo with the same plea: “Can you please help this animal?” At that point, it was obvious to Moe that she was supposed to do something about this dog. So she began gathering information and after 6 weeks of effort, Belinda, Coral and Moe were finally able to get a plane reservation to Turkey. 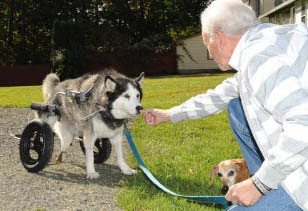 Read more to learn the whole, happy ending… Thanks, Khyra, for the great story tip!