WARNING: ANGRY FEMINIST RANT. Today’s is not a happy post. You may wanna skip this one.

My new cyber-friend, Dusty Rainbolt (yes, it’s her real name – wish mine was something interesting like that!), sent me a FaceBook invitation to join her “Helping Edwina” cause. I checked it out and it made me absolutely, physically ill late last night. 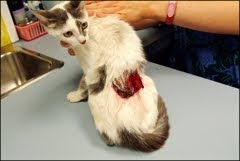 It’s another example of a sick, twisted human willfully creating a disabled animal. It is so far beyond anything I can comprehend that my mind just can’t wrap around the horror and senselessness of it. But Edwina still needs help, so if posting her story here can be part of bringing both her particular story and this general problem to light, I must do it.

I continue to imagine what it is that must drive these twisted individuals to hurt animals. And I can’t help but see that cats tend to get tortured more than dogs, at least in these really sick ways. It occurs to me that our society tends to vilify cats for some reason, while it tends to sanctify dogs. And this issue vexes me, because I think everyone tiptoes around the root of it.

Well, I’m tired of this behavior, because I believe it is part of an almost unwitting conspiracy of silence that allows it to continue. So I’m gonna venture my opinion, since this is my blog and I can. I’m aware that I’m probably going to make myself a pariah to some people…and frankly, I don’t care. SOMEONE has to speak up about this.

I think it started WAAAAY back when the species lived pretty much separately and didn’t have much to do with each other. But at some point, dogs became domesticated and for the most part, fairly obedient, subservient and dependent. This sat well with the Rulers of All Things at the time: men. Because men like to think they’re always running the show, even when they’re not — which is more often than they’d ever believe. (Guys, if this is a revelation to you, get over it. If it’s not, then you’ve obviously got a few years on you and know it’s the truth.)

I believe this whole attitude has always been the case, but that it became ensconced in cultural law in the Christian Bible. Right there in Genesis, where God says “Let us make man in our image, after our likeness: and let them have dominion over the fish of the sea, and over the fowl of the air, and over the cattle, and over all the earth, and over every creeping thing that creepeth upon the earth.”

My first thought is, What’s with this “we” business? I thought God was supposed to have done this whole creation thing alone? And I am SO glad we don’t have to still deal with the stilted “creepeth” kind of language anymore. But I digress.

The problem was that all the young dudes got it wrong when parsing out what this actually meant for them. They somehow mistook “dominion” for “domination,” which effectively removed the latter side of the “power = responsibility” equation. And it’s been an ugly scene for the critters — and women, and pretty much anyone else who was under their power — ever since.

But it’s been particularly ugly for cats. And in my mind, the connection is much the same.

All those years of the Christian religion trying to eradicate the influence of the nature-based pagan spiritualities have taken their toll. It makes sense to me that the big boys of the Christian church would single out cats — because they’re solitary, independent and uncontrollable, everything that’s anathema to this religion and especially to its men — as being “Satan’s familiars,” and somehow attached to black witchcraft.

As Dana Carvey’s Church Lady would say, “How conVEEEEEENient!” How utterly nice for them that they could culturally and legally subdue ALL that they couldn’t control in one fell swoop… and all with the imprimature of the Holy Church. Every time I think of it, I just seethe.

All through the shameful Burning Times during our country’s early settlement, cats were tortured and killed alongside any woman who dared live her life similarly solitary, independent and uncontrollable.

And apparently, that attitude has never left us. The endless stories of abused, battered and dead women is mind-numbing, and shows no sign of becoming any shorter. And I bet at least once a month I hear some guy make a remark about how much he hates cats. And cats pay for this all-too-ubiquitous hatred every day with their lives and their well-being.

I’ll bet I’m not alone in conjecturing that more than one cat has endured such pain because it happened to be in the wrong place at the wrong time and ended up standing in as a surrogate for the woman that guy REALLY wanted to hurt. But he knew no one would say too much if he just took it out on a cat. And it just makes me freakin’ sick.

I apologize if I have offended any of my Christian readers, but I believe what I say is the truth. And I don’t believe ANY religion has the right to use its holy writs as justification to harm any other living thing. And I don’t believe that EVERY man hates cats — I know better, and am thankful.

But am I saying that I’m certain that all these kinds of animal torture are inflicted by men? Certain — no. I can’t factually prove it. But my life experience tells me that I’m 99.9% sure that women — at least those in their right minds — just don’t do stuff like this to animals.

Yes, they occasionally drown their kids, even dismember them and throw them in swampy areas to dispose of the bodies, and I don’t take this horror lightly. I believe this behavior is driven by something related to what motivates men to torture and disfigure animals — but in an absolutely opposite manifestation. And this is not the place to discuss that. Neither is right, but they’re not the same. And I just don’t think many women do this to animals.

Okay, end of rant. I don’t hate guys. But I do hate a lot of what they do.

If you have the stomach for it, please read Edwina’s story and do what you can to help. If you can’t help, bless you for sending healing energy to this stray who didn’t deserve what was done to her.