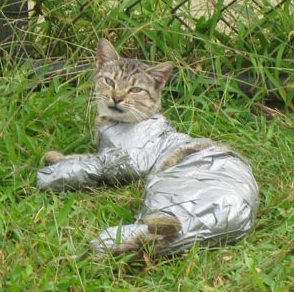 It’s been a bad month in Philly for animals. Among other things, some stupid dude duct-taped a small gray tiger cat from neck to toes and left her to die. Thankfully, he didn’t finish the job by covering her breathing apparatus, and someone called animal rescue, so she was saved. 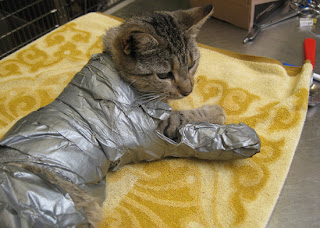 Here’s the happy story, telling how “Sticky” was rehabbed and adopted by some kind family. 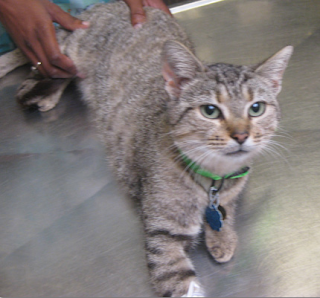 This is the kind of thing that helps me remember that for every evil, cruel slimebag roaming the Earth, there is a kind, decent, compassionate person worthy of being called “human.” And some days, I really need to be reminded of that.

For instance, on the day I learned that the Philadelphia Eagles stooped so low in search of a Super Bowl berth that they would hire Michael “The Dog Torturer” Vick. I never liked the Eagles for any number of reasons (not the least of which is that I’m a Packers fan) before, but now I just cannot stand them.

Is this the kind of message we want to send to our children? That winning is more important than decency? Vick is NOT a rehabilitated criminal, and he is NOT sorry for what he did. He’s only sorry he got caught. This little charade he’s currently on — where he delivers talks against dogfighting to high schools, etc. — is just that: a farce. As soon as all the brouhaha dies down around his being picked up by the Eagles, that will stop cold, I’m sure.

The fact is, though, that not everyone will forget. Some of us are determined not to. Like these folks, with their “Ethics Over Athletics” signs, protesting outside the stadium on the day of the first game in which Vick appeared (he’s still not allowed to play yet): 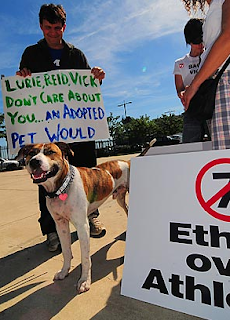 You GO, protesters!
But the folks I really admire are the ones from the Philly ‘burbs, at Main Line Animal Rescue. They put their money where their mouths are with this full-page ad they ran in the Inquirer: 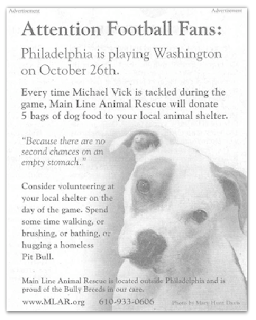 Woo-hoo! Talk about pay-to-play! This is one scheme I’m all for.

We need to keep up the pressure on the Eagles and the whole NFL. Every time Vick makes a play, instead of putting him up on the stadium big screen, they should show this guy, holding up a 60-lb. chain, used to “condition” fighting dogs. Three guesses what that little euphemism really means… 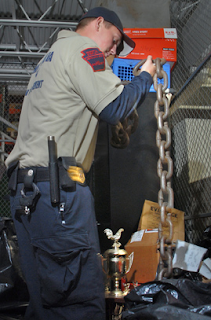 We can only guess at the number of dogs that have been maimed and tortured and turned into disabled animals over the years — if they weren’t just outright killed — by these kinds of practices. I’d very willingly take that chain to Vick myself. Let’s see how big and bad a man he is when someone turns his tactics back on his shameful self.

But then, I don’t think I’d want to touch him, for fear some of the ugliness might rub off. I’ll just have to concentrate on believing that the Karma gods know what they’re doing and will take care of him in their own time.