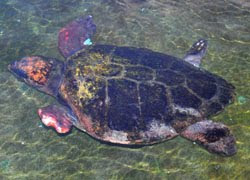 A little over a year ago Yu Chan, a 20-year-old loggerhead turtle, became entwined in fishermen’s nets in the Kii channel in Japan. Her wounds indicated she had also been attacked by a shark. She’d lost half of one forelimb, and a third of the other. She was brought to the Sea Turtle Association of Japan, which uses a saltwater pond near Kobe Airport for some of their work.

Loggerhead turtles are classified by the IUCN as an endangered species, and the organization treated her with according respect. After a period of recuperation, the plan was to release the turtle back into the wild. But some citizens of Kobe objected, saying it would be cruel to release Yu Chan back into the ocean in this condition. Without her full flippers, she would be vulnerable to predators and other hazards.

Kamezaki Naoki, Director of the Sea Turtle Association of Japan, explains: “We were thinking about releasing Yu Chan in the usual way, but some of Kobe’s residents objected and said that it would be cruel to release a turtle that had lost its flippers. And they were right.”

So, a fund was set up to help finance Yu Chan’s recovery, including paying for prosthetic limbs for the turtle. The Sea Turtle Association consulted Japan’s largest prosthetic limb manufacturer, Kawamura Gishi, and the company began work on the fake flippers.

The group knows it will be a challenge: There is no known successful case of artificial limbs being attached to sea turtles, which have fragile bones and use their limbs differently in water and on land.

“By promoting development of prosthetic devices, we want to apply them to other animals as well,” said Erika Akai, a 27-year-old researcher at the association who has studied behavior of dolphins fitted with artificial tail fins in Okinawa.

Read more and watch a video about this fascinating story. 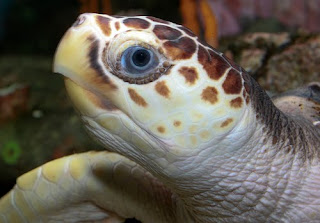 There’s more about Yu Chan and a related story about the American turle, Allison, here.