Wow, can’t believe it’s been over a month since I last posted! Sorry, y’all — I was on the road and then the holidays got here and now…it’s almost Christmas!

Here I am addressing a marketing breakout session at this year’s annual Cat Writers Assn. conference in White Plains, NY, just before Thanksgiving. I met some fabulous new friends and decided to join the group. What a passionate and fun crowd! 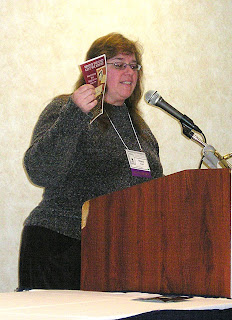 So, I’m thinking about things to celebrate. Here’s a brief list off the top of my head:

Okay, so among many things, those are the ones I’m thinking about being thankful for right now. How about you — what’s warming the cockles of your heart with gratitude as you look back over 2009 and ahead to the New Year?