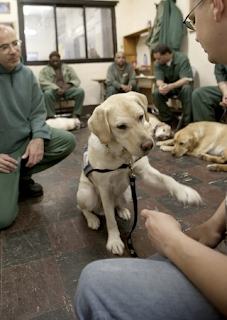 Mostly we talk here about disabled pets, but seeing as we’re in Spring and the Easter period — a time for new beginnings and rebirth — I thought it appropriate to share this video with you. It’s about how dogs being trained as service companions for military veterans suffering from Post-Traumatic Stress Disorder are healing not just the veterans, but the men behind bars who train them. I think it’s appropriate here because anyone who’s ever dealt with PTSD knows it’s a true disability, and animals have been diagnosed with it before.

These dogs — which appear from photos to be predominantly Labrador Retrievers — are trained by prison inmates in a program called Puppies Behind Bars. They’re entrusted to inmates who have proven they’re up to the responsibility of caring for an animal 24/7. 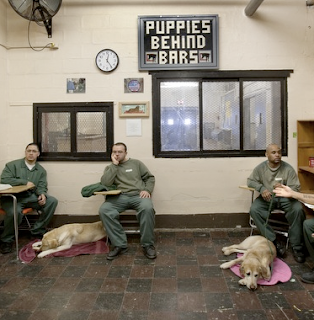 Photo courtesy of the New York Times
The inmates train the dogs to perform duties such as turning on light switches for vets who awaken from nightmares, frozen from fear; jumping on a vet who’s going into a flashback to bring him back to reality; or dialing 911 on a cell phone for a vet who’s in the throes of a flashback episode and can’t come out of it.

It’s a wonderful program, and the part I really like about it is that not only are the vets benefiting from it; so are the inmates who train the dogs. They have something productive and worthwhile to occupy the long hours behind bars, and this gives their lives meaning again. And for some, it even provides hope for a brighter future.

I’m not positive, but I remember watching a program about this on TV, and I believe they said that the animals also benefit, because they’re rescued from kill shelters and given a new lease on life. I just cannot imagine a better example of a situation where every single creature involved wins. It’s a truly hopeful and uplifting story, which as you know is our theme here at Almost Perfect. So, watch the video and give your own day a boost.