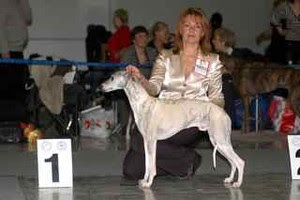 Taking this opportunity to congratulate Sharon Sakson, one of the authors who contributed to Almost Perfect, on her whippet’s win at the Moscow Dog Show. Sharon’s dog, Scout—also known as Champion Hitor Go Your Own Way in Paris—was named Champion of Eurasia for the whippet breed.

It’s a huge coup on the international scene for both dog and owner, and we’re very proud of Sharon, Scout and Julia. Sharon is a responsible breeder of Brussels Griffon dogs and enjoys showing and judging dogs, as well.

Check out the entire story to learn more about Sharon, Scout and the show. In addition to being a contributor to Almost Perfect, Sharon is also a columnist for Examiner.com, and a many-times-published author on the human-animal bond. Kudos, Sharon!