If you’re like most folks, you sigh every time you put a stamp on a letter. Forty-four cents, for pete’s sake, to mail a first-class envelope! You can’t even buy three stamps for a buck anymore. But today, you can feel a little better about spending your money on postage.

That’s because starting today, the United States Post Office begins selling their latest commemorative stamps, “Animal Rescue: Adopt A Shelter Pet.” During the launch of the stamps, the Post Office, HALO Purely for Pets and Ellen Degeneres (a longtime friend to animals) will be donating a million meals to animal shelters around the country. A first-class stamp for a first-class meal. Now, that’s a deal!

Any way you cut it, this is a neat thing the Post Office is doing. But as someone who’s been a stamp collector since I was 9 years old, I’m particularly proud of this campaign. We all bust on the P.O. for the relentless increases in postal rates, mangled mail and other annoyances. But this campaign points out something only our country’s Postal Service can boast of among its peers: a 50+ year tradition of raising awareness about serious social issues with special commemorative stamps.

The 44-cent stamps feature photos of five cats and five dogs who were all adopted from shelters. Photographer Sally Anderson-Bruce found these beautiful, adopted pets in her hometown of New Milford, Connecticut. Each of these animals was given a good home thanks to animal rescue shelters and the families who adopted them. Here, she tells the story of her involvement in this project:

On rare occasions, my dad talks about World War II and how he dreamed every day of coming back home to America. In The Wizard of Oz, Dorothy clicks her ruby slippers together and chants, “There’s no place like home.”

I also look forward to coming home. The first thing I hear when I opent he door is a tail thumping against the floor. It’s Brenna, our newly adopted nine-year-old Irish Setter, saying hello. “I’m so glad you’re home,” she says with her wagging body. “You are the most wonderful person in the world!” Brenna’s energy is contagious. I forget about my work, grab her leash, and off we go on a new adventure. All the troubles of the world just magically float away.

When art director Derry Noyes called to discuss a new Postal Service stamp project that would promote the idea of adopting shelter pets, I jumped at the chance to work with her again. Derry knew that I had been photographind shelter and rescue pets and writing their stories since our collaboration on the 2002 Neuter & Spay stamps. This new project would be extra special to me.

I find it heartbreaking that millions of innocent animals are signed over to shelters and rescue groups every year—not because they’re problem pets; their families simply couldn’t keep them. The reasons are endless: job changes, illness, foreclosure, kids going away to school.

My local shelter now has a waiting list for pets to get in because the shelter is full. The lovable pets there are eagerly waiting for a new home to brighten their lives and yours. Adopting will also rovide a vacant cage for another homeless pet.

I hope you will enjoy using the Animal Rescue: Adopt A Shelter Pet stamps and will consider visiting a local shelter for your next pet, who might just be channeling Dorothy and thinking, “There’s no place like a ‘forever’ home.” (Excerpted from USA Philatelic: The Official Source for Stamp Enthusiasts, Vol. 15/Qtr. 2/2010) 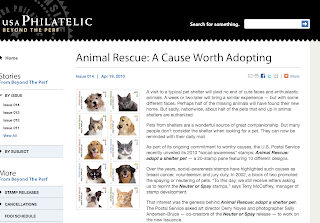 And if you like the stamps, there are some other related products available at some post offices. Notecards, First Day Covers, Pet Adoption Certificates and an All About Your Best Friend record book are a few of the items also carrying Anderson-Bruce’s pet images. Learn more about all these things at USA Philatelic. And put a furry face on your next mailing. It’ll mean so much more than just another letter.