This is a bittersweet post today. I’m very happy to report that our FREE teleseminar,

has been re-scheduled with Conscious Cat host Ingrid King to 8 PM EDT on Thursday, June 24th. I’ll be joining Ingrid and Barb Techel, mom to Frankie the Walk ‘n Roll Dog, for what I’m sure will be a lively and interesting discussion about a favorite topic of anyone who follows this blog. 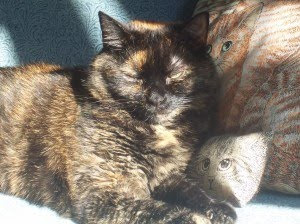 Not so happy is why we had to reschedule. For ten days, Ingrid struggled to save her dear tortie cat, Amber, from a digestive tract virus. During that time, they discovered Amber also suffered from a hidden heart condition that prevented full therapy for the digestive issue. The end result was that they couldn’t save Amber, and Ingrid cradled her little girl to her final sleep last week.

Now Amber has crossed the bridge, and Ingrid is very sad. The one bright spot is that she had rescued another tortie, Allegra, a few weeks earlier, so she’s not left with a big, gaping hole in her heart and nothing to fill it. I encourage you to visit Ingrid and leave some good thoughts there.

Then, yesterday afternoon, I got a call from my friend and hair stylist, Patty. She’s been going through a rough patch, learning just months ago that her mom had Stage IV, inoperable cancer that would move into her brain. Her mom lives just a few blocks away from her place, so she’s been spending a lot of time over there, going back and forth between her house (in which she has her salon, where I visit her) and her mom’s.

I always enjoy getting my hair done because we have a lot in common, we talk a lot, and the bonus is that Patty’s a critter person. She loves cats and dogs like we do, and we share that bond, as well. Late this winter, Patty told me during my hair appointment that she wanted me to say goodbye to her ancient cat, Crystal, because she was going to put her down the next day. I was horrified, because I know how much she loves this cat.

Crystal was, like, 20 years old; mostly blind, deaf, and when she couldn’t eat regular cat food anymore, Patty — who doesn’t cook — would cook up some liver and other things the vet said Crystal could still digest. But the end had come: Crystal wasn’t even moving around anymore, had begun missing the litterbox on a regular basis, and Patty told me that she had spent the evening before just holding and stroking Crystal and looking into her eyes. She said those eyes begged her for release, and I believe her.

So I said goodbye after my hair was done. Went into the living part of the house and found Crystal lying curled on a thick, soft pad, and petted her. I told her she was a good girl, that she had made her momma so happy and kept her company through so many hard times. And that we would all see her again when we passed over the bridge. It was sad, but I could see it was time (Why the hell can’t we do this with people, allow them to leave this life in some semblance of coherence and dignity?), and I was glad Patty was going to put an end to any suffering for a life that no longer had quality.

But it wasn’t to be. Apparently, Crystal had gotten the message that we were all okay with her leaving, and she decided to go on her own, just as her momma’s next work day was ending. Patty came into the kitchen to get her and take her to the vet, and she was lying peacefully on her side on her little bed, already gone. I truly believe that all of us saying goodbye gave her permission to leave without having to worry about her earth family, who she was leaving behind.

Fast forward to this week. I had been to have my hair done on Tuesday evening. It had been a few months since Crystal’s passing, and you could still feel the void. But the main thing you could feel was the impending loss of Patty’s mom. In fact, on Monday, Patty had called to cancel our appointment, believing her mom was imminently going to succumb to the cancer, which had crept into her brain and was now rendering her incapable of recognizing her daughters. She had then called back Tuesday morning, saying the in-home hospice caregivers had said there would be several more days before that happened, and if I wanted to reinstate my appointment, I could. So I did.

At this point, it wasn’t so much about the haircut, but I wanted to see Patty and just be there for her. I was sure she needed to talk, and boy, was I right. We usually have a lively, rollicking, two-way conversation while she works on my hair and I pet her sweet little half-shepherd/half-something else dog, Gia. I swear, that dog SMILES. She does. 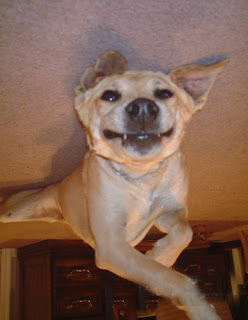 This isn’t Gia (I don’t have a pic of her), but it is how she looks when she smiles.

She’s not usually allowed in the salon part of the house when most of Patty’s customers are there, but she knows I love Gia and it seems to be mutual, so she’s allowed to come in while I’m there. But on Tuesday, I said very little. Patty looked and sounded exhausted, but I had been right: She REALLY needed to talk. So I pretty much just listened, and was grateful for the happy distraction of Gia to buffer some of that horrible pain I could feel emanating from my friend.

I watched as, while we were waiting for my hair to process and we talked, Gia stayed very close to Patty. She seemed to be following at least the feel of the conversation, and when Patty would get close to choking up, Gia would suddenly materialize beneath her hand. That hand would automatically run itself down Gia’s furry back, and Gia’s tail would swing slowly back and forth. I was so thankful she had that dog, and Patty mentioned several times that between her own grief and trying to keep her four daughters stable during their grandma’s swift and unmistakable decline, she didn’t know what she’d do without Gia.

So it was with a huge amount of horror that I listened to Patty’s voice tell me, when I picked up the phone yesterday afternoon, that Gia was dead.

“WHAT!?” I said, incredulous. I had told her to call to just let me know when it was over with her mom, and I thought that’s what the phone call was about, but no. Turns out, her daughter had called over to Patty at her mom’s and said something was really wrong with Gia and she needed to come home. By the time she got there, Gia was already gone. No one knows what happened. Gia was only 8 years old, and in apparently perfect health. Patty thinks she may have had a heart attack or stroke, but whatever it was took her very quickly.

And so, all I could do was sit on the other end of the phone and listen to my friend sob. She has had to absorb so much loss lately, and now the one pillar of strength she had to lean on was gone. I had no words of comfort for her. I simply felt wretched and inadequate. All I could do was say how sorry I was and let her cry. And not start crying myself, because I adored that dog.

Today dawned sunny for the first time in days and days. I’d been looking forward to this, because I live for sunny days. But even though I see the sun today, I don’t feel it. There’s a little Gia-shaped cloud over my head, preventing me from fully enjoying the sun.

Those who know me well know I believe everything happens for a reason, and this doesn’t change that. But I’m having one of those days where I want to shake my fist at the sky and ask why such awful, difficult, painful things happen to such good, sweet, kind souls.

I know this is off-topic. Thanks for letting me get it off my chest. I learned when I lost my own mom five years ago that pain shared is pain halved. Thanks for taking some of it away just by letting me vent.