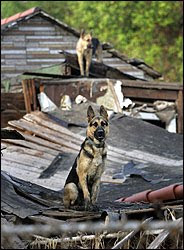 Too often on this blog, we have to deal with sad situations that are out of our control; situations that result in injured or disabled pets. But today I want to remind you that there is one situation that too often results in these things, but this doesn’t have to happen. I’m talking about natural disasters.

With today being the fifth anniversary of Hurricane Katrina striking the Gulf Coast, I think it’s an appropriate time to revisit the idea that human parents can and should create a disaster plan for their families that includes ALL their kids, including their fur babies. Considering that as I type, there are three active tropical systems churning their way across the Atlantic toward the US, this concern gains somewhat more urgency.

As a member of our township’s Emergency Management Agency, I’m all too aware of the need for families to have an emergency disaster plan. I also know that failing to plan means planning to fail, and as responsible parents of any kind of critters from human to the tiniest fish, we can’t allow ourselves that kind of complacency. So I urge you: If you haven’t yet created a family emergency plan that includes what to do with your pets in case you can’t get back to your home or you must evacuate, PLEASE prioritize this activity. You may not live near a coast that puts you in danger from hurricanes, but I guarantee you’re in the path of some sort of natural or man-made disaster, regardless where you’re located.

Happily, one of the results of the Katrina debacle was the realization by government and other disaster authorities that many people consider their pets “family,” giving them every bit of the love and regard denoted by that word. The fact that so many humans died because they were unwilling to leave their beloved pets behind to die alone was a massive wakeup call for these authorities. One of the most significant outcomes of this realization was a major policy shift on the part of the American Red Cross. 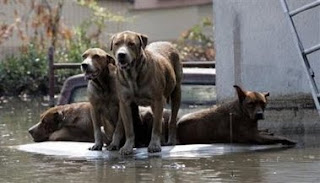 As wonderful and necessary as this organization is, for far too long it neglected the needs of companion animals in time of emergency. Aside from the clear neglect caused by this blind spot regarding the actual feelings and beliefs of pet owners, the organization also overlooked the very real negative impacts on already-traumatized humans forced to abandon their pets because they weren’t allowed in the emergency shelters. The horrifying results of this short-sighted policy during the Katrina-Rita-Wilma emergencies forced a new look at it, resulting in an enlightened new policy.

Though some Red Cross chapters still refuse to shelter pets, that tendency is falling by the wayside. An increasing number of chapters either accept pets in nearby pet-only shelters run as an adjunct to their human sheltering activities, or work closely with local pet rescue organizations to provide guidance for pet owners to get their animals to a safe place while they’re sheltering out of their homes. The Red Cross now directly addresses pet safety issues in their general public directives regarding evacuations and sheltering. They’ve developed a guide to effective animal first-response, and training for those who need it for such efforts.

Much of this response was mandated by House bill 3858, the Pets Evacuation and Transportation Standards Act of 2006, more commonly referred to as the PETS act. Now, many states, counties and municipalities have formed their own Animal Response Teams.

Where we live, it’s called B-CART or Bucks County Animal Response Team. This all-volunteer group is dedicated to working with local people in the event of evacuation for any disaster to provide safe, temporary shelter for companion animals, with the goal of reducing stress on the animals and their families during such relocations. It’s hoped that their providing this alternative housing will reassure those who might otherwise opt to put themselves and their pets at risk during an evacuation because they can’t be together. The animal and human shelters are actually not in the same locations, due to health and sanitary regulations, but every effort is made to allow reasonable access to one’s pets at the separate location.

Don’t have an ART in your area? Consider starting one! 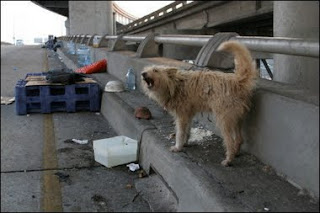 Whatever else you do, please find out NOW what your options are to make sure your whole family is safe during emergencies. Make a plan and make sure all your family members know what that plan is. Not only will this give you one less scary thing to have to deal with during an already upsetting time, it’ll give you a whole lot more peace of mind while it’s happening and make recovery so much easier. Let’s make sure we’re all part of the solution, because this kind of sadness need never happen again.